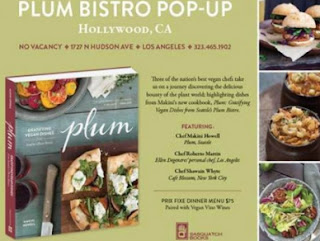 My husband made reservations to a vegan pop up dinner several weeks ago, but neither of us gave it much thought until the day of. Not knowing what to expect, I was delighted to find that it was taking place at an old house in Hollywood, which is being reincarnated into some sort of night club called "No Vacancy." Normally we couldn't be persuaded to leave our house on the Westside of LA to go to Hollywood on a Sunday, but the lure of a visiting vegan chef and the design of the newly renovated space was hard to resist.

First, the space. Elegantly renovated, it made me long to get my paws on a historic house and restore it to its former glory. A little digging revealed that it is owned and was renovated by Houston Hospitality, a company owned by twins responsible for several other LA clubs. All I have to say is thank god I was experiencing this venue in the context of a sedate vegan dinner, because this girl does not do clubs. At all. Not in my twenties, and definitely not in my thirties. While I loved the feel of the space, and it has been meticulously restored and decorated, I can only imagine being crammed in there with 200 other people. Blech. But kudos to them for bringing life back into this old house.
As for the dinner, it was amazing. We got to meet the chef, Makini Howell, who was so friendly and signed the cookbook we bought - Plum: Gratifying Vegan Dishes from Seattle's Plum Bistro. We joked about how hard it was to find good vegan recipes that non-Vegans will actually enjoy.

I'm not much of a "foodie," so I won't give you a blow by blow description of everything we ate, but suffice it to say it was delicious, beautifully presented and paired with amazing wines from the Vegan Vine. If you want more food description, check out this entry about the event by Serious Eats.

So, A+ on all fronts - the beautifully renovated No Vacancy, Makini Howell's cooking and the Vegan Vines' wines!
Posted by Glamour Goes Green at 6:48 PM No comments: