Looking for history in Los Angeles is a bit of a challenge. Like movie stars, Los Angeles tends to  want everything younger, fresher, newer. Instead of restoring our city, we move on to the next new development, tearing down or paving over anything that gets in the way.

Because of this, I find old photographs of Los Angeles intriguing. I love seeing what different areas used to look like, and also playing a version of "Where's Waldo," where you spot still existing buildings that have survived the years.

I've been following a great site on Facebook called Vintage Los Angeles. They post great photographs and stories relating to Los Angeles history. Today they had a post about the Hotel Alexandria in downtown Los Angeles that I found absolutely intriguing. 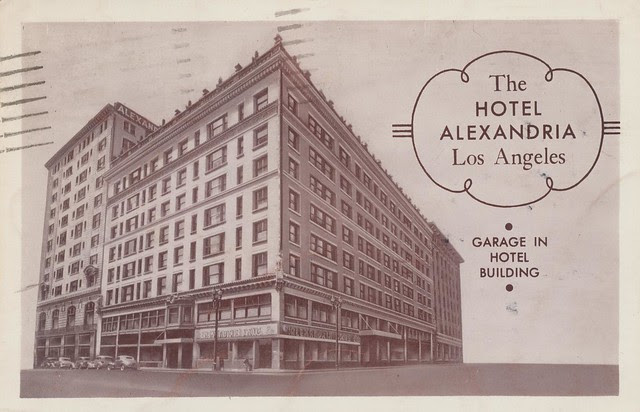 The short version of the story is that a wing of this hotel was completely sealed off in 1938, turning it into a time capsule, of sorts. This part of the hotel was built on a separately owned parcel from the main hotel and the two owners got into a dispute.  (For the longer story and some photos, go to this October 2012 story from the Los Angeles Times.)

A developer recently purchased the sealed up portion of the hotel and plans to turn it into condos. The crazy thing is that as of the time of the story, even the developer had not unsealed the rooms. I tried looking for updates on this story, but came up with nothing. Fascinating stuff! I wonder how many other "time capsules" there are in the downtown LA?


Posted by Glamour Goes Green at 2:57 PM No comments:

If you would have told me a couple years ago that my husband would be turning vegan, I would have said you were crazy. This was a man who enjoyed fois gras, bone marrow and all the other meaty products that most American meat eaters won't even touch! However, people change, and we are now on a mostly vegan diet.

In light of this, we've been searching for new restaurants that have great ambience and an upscale feel that also offer enough menu options for vegans. This is no easy feat. While I love the food at Real Food Daily and Native Foods, the atmosphere of these restaurants doesn't exactly scream "date night." 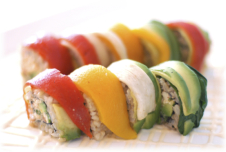 Enter Shojin. I'd read about this restaurant a few months back, but the fact that it is located in downtown LA was kind of a turn off for this westside lady. Downtown is fun, but driving there on a Saturday night can be decidedly unfun.  Great news! As if reading my mind, the owners of Shojin opened a Culver City location last week.

Here comes the ironic part. After reading the reviews and looking at the menu, my husband and I were ecstatic to try this place! Unfortunately we couldn't get a reservation. Boo. So, what do we do? Call and get a reservation at the downtown location. You know, the one we haven't been able to drag ourselves to for the past few months since hearing about? (Photo of downtown interior at top left.)

Well, I'm glad we did. The food and service was amazing. I mean, look at this menu! Can you believe it is vegan?!! We ordered the Shojin Gyoza, Spicy "Tuna" on Crispy Rice, a couple of the "sushi" rolls, the Orange "chicken" Seitan and a Molten Lava Cake with Vanilla Ice Cream. (Pictured above and at left are the Gyoza and the Rainbow Roll.)

This is definitely a special occasion type of restaurant, as the prices are a bit above what you would pay for a quick bite to eat. However, the quality and variety are well worth it! I'm so excited to try the Culver City location next, as driving to downtown was the only negative part of this dinign experience.
Posted by Glamour Goes Green at 10:27 PM No comments: